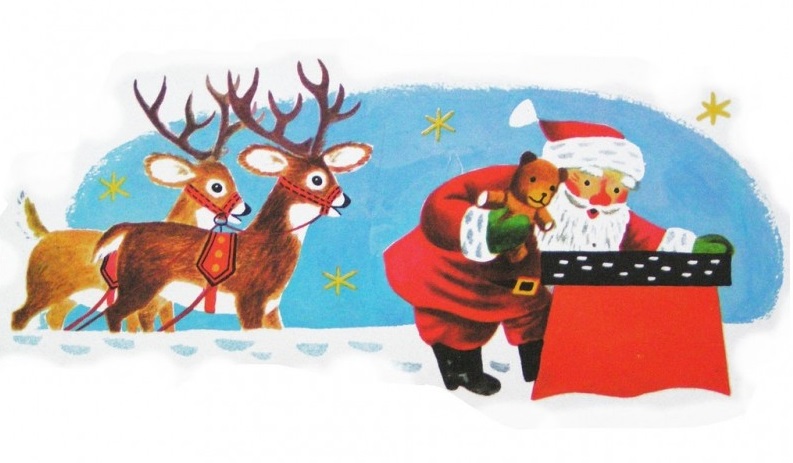 I used to not question things. I used to just do what was considered normal, without consideration. There was a time when I assumed my kids would believe in Santa; that it would be a normal part of our Christmas. Like I said, I actually didn’t even think about it…it was just stored somewhere in my brain, and any envisioning my family at Christmastime included Santa. He was just there, because that’s what I knew, and what everyone else did. As I’ve grown and realized not everything that is “normal” is good, I’ve learned to question things. To stop and evaluate why we are making the choices we make. This is a decision we made well before having kids, and one we would hope other people would respect.

Jones is 3. He doesn’t know who Santa is. Sometimes we pass by a gift bag with that bearded face on it, and I ask him if he knows who it is…just to see if he’s picked it up somewhere. He hasn’t yet. Not because Santa is voodoo, but because we just don’t talk about him. But let me tell you what he does know about. Presents. I realize this is partly my fault, and I haven’t focused enough on celebrating the miracle of Jesus coming to Earth, to dwell with His people, and perfectly atone for our sin in His death on the cross. But let’s be honest. That isn’t super interesting to my 3 year old. I mean he can hold like a 3 minute conversation about it before changing the subject. But presents. He remembers that part. He remembers the Christmas trees, the lights, and the presents. And he really loves and enjoys each of those things. On Christmas morning, when he is surrounded by 15 gift bags (he has lots of loving aunts and uncles), he is not missing out on the “magic of Christmas” or whatever. I promise. He does not need Santa to get excited about Christmas, and he doesn’t need Santa to distract him from Jesus. He is plenty distracted as it is. I understand, because I’m just as easily distracted, even though it has nothing to do with a man in a red suit. My point is that it is difficult enough in this season of gifts, family, traditions, busyness, hustle and bustle to “remember the reason for the season”. We do not need another distraction. For myself or my kids. I hear all the time “we do Santa, but we teach our kids that Christmas is about Jesus” in some form or another. But I think we should know as adults, that Santa is a bit more appealing to children. That if that is part of our Christmas, that is where the focus will be for our kids.

As a Christian, I am called to honor the Lord with my life, and to point others toward Him. It is my responsibility to raise my kids in knowledge of truth and love for the Lord. The most basic reason my kids won’t believe in Santa is because we will never tell them that he is real. Because he isn’t, and we will not lie to our kids. Can we all just admit that telling our kids Santa is real is a lie? Sure we could go into all the history about St. Nick and where the whole idea came from, but Santa has been hijacked and he and St. Nick are not the same guy. We aren’t so attached to Santa that we need to look for a reason to make him okay to include in our holiday. Lying to our kids isn’t honoring the Lord, and it isn’t teaching them what is good and true. Lying isn’t something I want to model for my kids. Kids don’t intrinsically know who Santa is, they are taught to believe in him. Santa is talked about and treated as though he is a real person. We won’t encourage our kids to believe something is real when it isn’t. We don’t do that with any other fictional characters, why would we with Santa?

I know people say it’s harmless, but I disagree. And maybe some people never actually tell their kids Santa is real, but I don’t think there is much of a difference in saying it and leading them to believe it. A lot of it has to do with the kind of relationship we want to have with our kids. We want them to trust us in everything, but most importantly, when we tell them who Jesus is and what He has done for us in dying a death that we deserve, allowing us to be in right relationship with the Father, and spend eternity with Him, we want them to believe us!

We aren’t like super-spiritual, or think we’re better than everyone else because we REALLY love Jesus, and we’re really gonna focus on the true meaning of Christmas, and everyone who does Santa says they love Jesus but really they don’t love Jesus that much. We know there are godly people that do the Santa thing. I can’t say I understand it, but I know that my way isn’t the only way. We aren’t searching for some deep purpose in everything we do (not to say that we shouldn’t). We have a Christmas tree for the first time this year (because it didn’t quite fit in the budget other years, and this year my father-in-law bought us one), we do presents, we drive around looking at Christmas lights. We do all of those things because we enjoy them, and think it is beneficial to enjoy this holiday season, but we can’t say the same for Santa.

I do think the fact that many people can’t separate Santa from Christmas is pretty telling. Santa equals fun for so many. Santa equals a special part of childhood and fond memories. Literally, people have made comments to the effect of “Christmas must be so boring for y’all.” Some people actually go so far as to say it is beneficial for kids to believe in Santa. All that mumbo-jumbo about teaching them to believe in something they can’t see. But it doesn’t make a whole lot of sense to me to teach that lesson using someone who is not real, when we can teach them about God, who they can’t see, who is real. There won’t be disappointments at age 8 or 9 (or whenever kids learn the truth about Santa), because God will still be real.

Some people use their parents/families as a case for doing Santa. My family probably thinks I’m pretty weird at this point, so they probably weren’t too surprised when I mentioned this decision. But opinions of my family members are not enough to cause me do something that I believe is not beneficial.

“Well, what about if they ruin it for other kids?” you ask.

I’ll be honest with you, I don’t really care. I’ll probably lose friends for saying that. Of course, I will do my best to teach them to not talk about it with other children, duh. Unfortunately, they will be 4 and then 5 and then 6 and they probably will still not do everything I say. But I think we have to understand something. If our kids believe in Santa, who is not real…at some point, someone is going to ruin it for them. At some point, the truth comes out. So it seems to me that if someone ruins it for your child, you should be mad at the person who made them believe something that wasn’t true in the first place. (I know, do I even want people to read my blog anymore?!?!) Because they wouldn’t be upset that Santa isn’t real, if they hadn’t ever believed he was. We are so used to blame-shifting that we’ve found a way to fault others for a mess we got ourselves into. I find it extremely backwards that we would take our anger out on someone who tells the truth, be it parent or child, when we’re the ones who set them up to be disappointed. Unfortunately, I cannot control that anger, so again, believe me, I don’t want my kids to be the ones running around yelling “Santa isn’t real!” so we’ll do our best, but we made this decision knowing we can’t control everything that comes out of our kids’ mouths. And if you are making the decision to teach your child that Santa is real, then I think you should accept that with it comes a risk that they will find out the truth, and that there are people in the world that are not going to cover for you, and even that there are people that will accidentally say something in front of your child that gives it away. Of course, for some parents it’s not about their kids being upset, but about the death of Santa in their house. Sometimes, the parents are more attached to the whole idea, and more upset about them realizing he isn’t real, than the kids are.

I grew up with Santa. I wasn’t upset when a friend told me their parents had said he wasn’t real. I don’t think kids who grow up believing in Santa will be scarred for life when their little hearts are crushed. They will get over it. Of course, people can say we’re making this big deal out of something that isn’t really a big deal. But if it isn’t pushing us towards Christ, isn’t it pulling us away? Is an added hindrance really worth it? If we can’t imagine Christmas without Santa, aren’t we proving the point that celebrating the birth of Christ is not our supreme focus?

It feels like there is this immediate backlash towards those of us who have chosen to leave Santa out of our Christmas. There is this immediate justification of why Santa is okay and even good. But I hope we can stop defending our stance long enough to actually consider whether it really is the most beneficial thing for our kids. If we come away deciding Santa is essential to celebrating Christmas, then at least we’ll have taken the time to think about it, and can incorporate him into the holiday with a clear conscience.

2 thoughts on “The Case For No Santa”